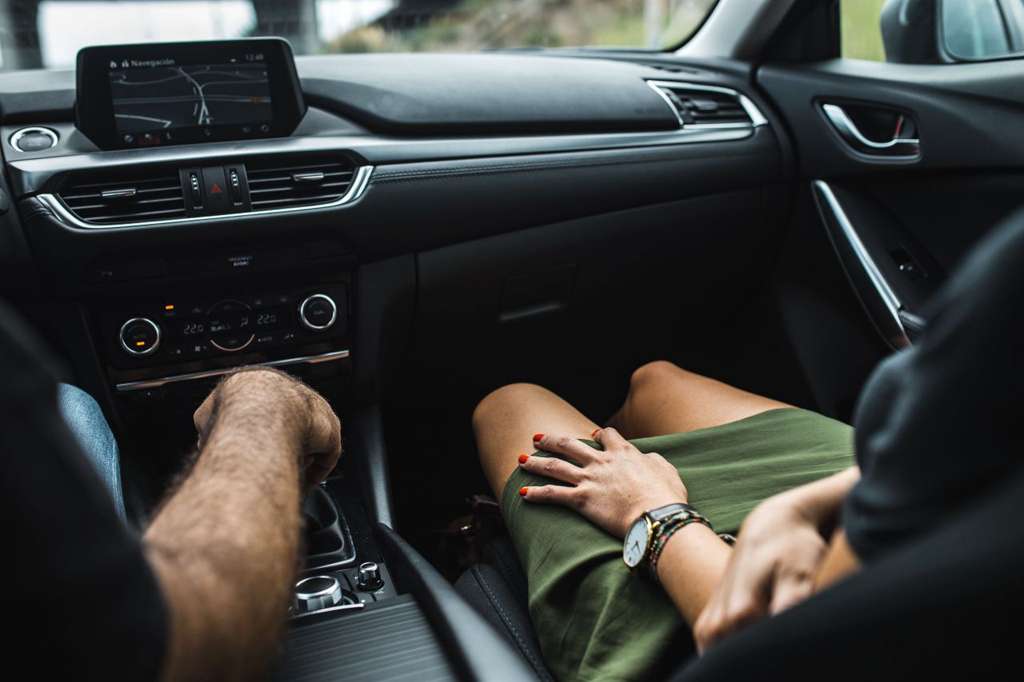 One that makes any car ride on the interstate a nightmare—for me and whoever is driving, which is usually Hans.

I’ve gone from being something of a backseat driver to a very fearful passenger who’s constantly gasping as if we’re about to crash and pushing my foot to the floorboard as if I have a brake on my side of the car.

However unpleasant you imagine it might be to have me alongside while you’re driving, multiply it tenfold. It’s worse.

Two things I know for sure:

Luckily, this only happens when we’re on 70-mph interstates. Unfortunately, when we do have reason to be on the freeway, it’s usually for hours-long stretches of time.

Can you say not fun?

I don’t like to think of myself as a fearful or anxious person, and I’m not proud of my increasingly neurotic behavior.

If roles were reversed, I’d be exasperated with Hans for not getting a grip—probably resorting to a less-than-compassionate, Snap out of it!

It’s just the way I am

Now, here’s the second part of my confession: I wasn’t planning to do anything about my growing fear and bad behavior.

I figured: Hey, Hans and I aren’t on the expressway that often. I’ll grin and bear it. And he’ll just have to put up with me repeatedly gripping the dashboard and telling him to slow down.

I thought: I’ve become a fearful passenger at 70 mph. It’s just the way I am.

But then I read Amy Johnson’s The Little Book of Big Change: The No-Willpower Approach to Breaking Any Habit 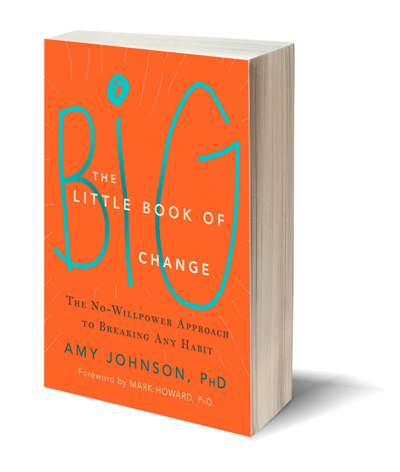 Looking back, I’m surprised I was so ready to accept the status quo of my behavior.

Because if someone came to me complaining about disruptive behavior that interfered with quality of life (even infrequently), I wouldn’t say, Well, that’s just the way you are. Guess you’ll have to live with it.

Yikes. I don’t believe in that limiting way of thinking for a moment.

So what a happy coincidence to read The Little Book of Big Change and see my habit in a whole new light.

Amy believes all unwanted habits (and even addictions) are the result of impersonal brain wiring.

We often take an unwanted habit as being stable and saying something about us as a person. Like I thought, Oh, I’m just a fearful passenger now. It’s who I am.

Not so, says Amy.

A breakdown of my bad habit

So let’s take a closer look at what I’m calling my “habit”. (I warn you: It’s not pretty. If you were thinking of inviting me on a road trip, I have no doubt you’ll have second thoughts after reading this.)

Hans, bless his heart, tries to be understanding about how uneasy and keyed up I get. But eventually he wearies of the drama.

While I hate bickering, it releases some of the tension that’s built up and momentarily distracts me from my fear.

Of course, now there’s the tension between us to deal with, but at least that doesn’t cause my life to flash before my eyes like the fast moving car ride.

Wait, I’ve seen this movie before

But look at the mess I’ve created. And how I’ve now programmed my brain to replay this same loop.

What was, in the beginning, a one-off scenario when we drove out of state has now become The Way It Is. It’s like a movie I’ve seen a dozen times. I know all the dialogue and plot twists.

The moment we pull onto the expressway my fearful thoughts and “bad” behavior of backseat driving get underway. Eventually a squabble ensues, and I feel the pressure of my fear released and relieved as we travel a few miles in silence.

Then it builds up again. And I feed the fear—and my habit—for another round of miles.

Like I said, you do not want to get in the car with me if an expressway is involved.

After reading The Little Book of Big Change

, I’m realizing my habit is the result of simple brain wiring.

By doing my habit repeatedly (hey, that’s what makes it a habit, right?), I’ve formed neural circuitry in my brain.

Bummer, yes. But the good news is my habit—and the brain wiring that goes along with it—can be easily reversed.

I love Amy’s explanation of the lower brain versus the higher brain.

“The lower brain—also called the reptilian brain or the inner lizard because of its presence in the earliest, most primitive reptiles—is rudimentary and machine-like. It is like your inner alarm clock, unthinkingly carrying out its habitual patterns. The lower brain picks up on patterns and habits and fights to keep your habits alive, partially because it believes they are essential for your survival.

But although the lower brain is certainly skilled at producing urges, it is not capable of acting on them. Decision making and complex muscle movements require the more sophisticated abilities of the higher brain.

Before you’re aware that the inner lizard can only produce commands and can’t possibly act on them, the commands feel compelling and ominous. You feel powerless over those thoughts because you believe they will eventually win out. They seem louder and stronger than you are.

When you insightfully see that the only way an urge will be acted on is if you (via your own wisdom and your higher brain) choose to act on it, things begin to turn around.”

My lizard brain is not the boss of me

If I’m imagining a situation (accident, etc.) that’s not really happening, then I know it’s only thought.

And thoughts do not have to be acted on.

Nothing outside the car (traffic, fast moving cars, construction, etc.) is making me do anything (grab the dashboard, grip the seat, tells Hans to slow down).

Those outside “triggers” don’t make me act on my urge to go into my habit. Regardless of how loudly my lizard brain shouts, Danger! Danger!

Amy has this to say:

“Your habit is the manifestation of your relationship with the thoughts that float through your mind. The way you view, relate to, and act on thought is the sole ”problem”. Your habit is just the consequence.

The antidote to acting on your urges is seeing the truth about them. Despite the emotional and physical punch they might pack, they are a temporary experience. They are harmless in and of themselves. They don’t require action. You can have the experience of an urge and do nothing; it will fade.

While we don’t necessarily have any input into the thoughts and commands that appear in our awareness, we do have a say in whether we obey them. Neuroscientists refer to the ability to veto any thought that occurs to us as free won’t.”

I have a choice

Amy says choice is always possible. And this aligns with everything I believe and know to be true.

Which means all my “bad behavior” on the interstate is a choice.

The thoughts that pop into our awareness are often random and sometimes unwanted. That’s just how we’re wired.

So I’m not beating myself up for having the, Oh my gosh, we’re going to hit that car thought.

My inner wisdom knows I don’t need to obey my urge. I have the power of choice.

Amy shares this great analogy that makes me want to let a lot of buses go by:

“When you are deeply aware that urges aren’t ”you,“ acting on them isn’t as compelling. You simply find yourself jumping into action far less. It would make no more sense to act on your every thought than it would to jump on every bus that passes your house. You will effortlessly find yourself letting those buses—the ones that take you toward your habit, or anywhere you don’t want to go, for that matter—pass you by.”

Now, here’s my last confession: I haven’t put any of this newfound insight into practice—yet.

Next time we pull onto the interstate, my intent is to make less of the presence of those we’re going to crash thoughts. I’m not going to fight those thoughts or feed them.

I’m going to gently notice those passing, powerless thoughts as nothing more than a warning signal my imagination is having its way with me. They are nothing I have to act on or overpower.

I’m confident the thoughts and urges will fade. Who knows, I might even enjoy a cross-country road trip!

I find this from Amy particular encouraging:

“The mere presence of thought is not a problem. Thoughts and urges are part of being human. It’s only what you make of those thoughts or urges—what you believe about them and how you relate to and interact with them—that matters.

At some point, when you stop acting on urges and you no longer give them attention, they stop showing up…. The important thing to know is that the more you see your urges as harmless, fleeting thoughts, the easier it becomes to not act on them. The less you act on them, the weaker they become and the less you experience them.”

Do you have a bad habit?

Now, in all likelihood, being an overwrought, agitated passenger is probably not your bad habit.

But I’m guessing you’ve got a bad habit of your own. Some behavior you habitually engage in you’re not too happy about. That doesn’t serve you. But that you seem unable to stop.

So, read Amy’s book The Little Book of Big Change

. I promise, you won’t look at your habit in the same way.