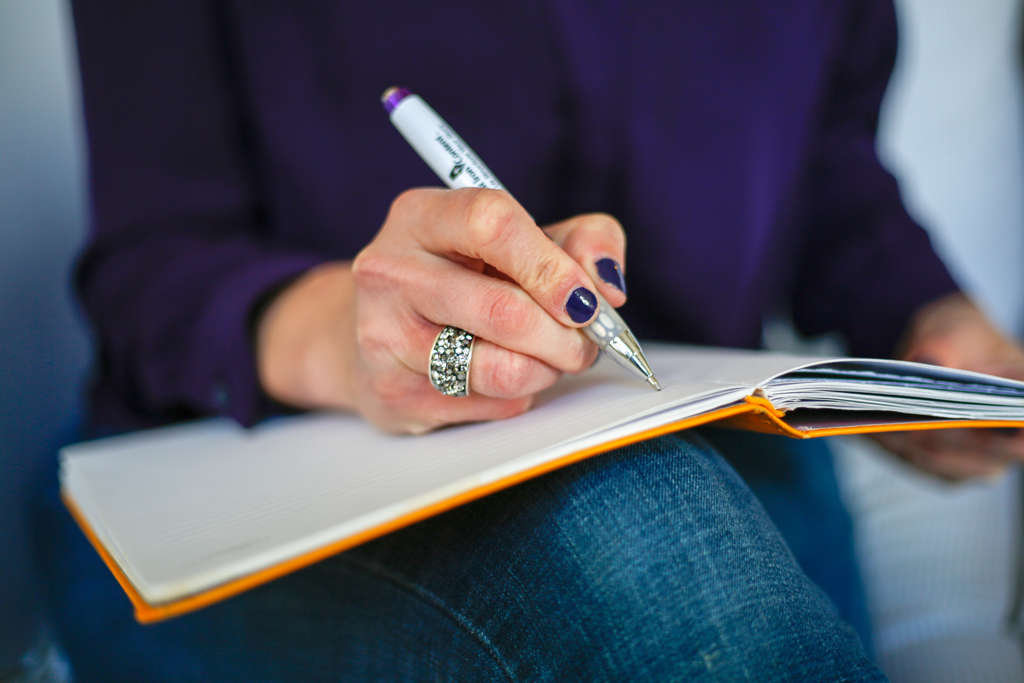 I’m realizing it’s like an onion. You peel back a layer of striving, efforting action and you think, I get it. And then weeks or months later you realize there’s a whole other layer to peel back. At least that’s what has happened for me personally and what often happens for my clients.

In other words, we think we’ve got this inspired action thing figured out.

We’re no longer pushing like we used to in order to make things happen. We’ve stopped hustling and grinding to get what we want. We’re much more tapped into the flow of the Universe and following our intuition.

It’s two steps forward into inspired action and then a step back into striving and efforting.

When you are making great efforts to achieve your goal or acquire the shiny penny, you are not taking inspired action. You are not headed downstream with the flow. You are headed upstream trying hard to make something happen.

What I’m realizing is taking inspired action is not a choice you make once and you’re done. It’s a way of being in the world, a way of showing up in your life that you choose over and over.

We live in a culture that presents many opportunities to ditch inspired action for striving action.

You may be surrounded at work by others who are only taking striving action. Your circle of friends may be efforting their way to try to get what they want.

But let’s be clear: It doesn’t matter what our culture or your colleagues or friends are doing.

What examples do you have from your own life of times you took joyful action? And then what about the times you took action from a place of contradicted thought?

My relationship to action is night and day compared to what it used to be.

In the past, it was all forced action and massive action. It was all hustle and grind. Efforting was my go-to way of showing up in my life. Striving action was the only way I knew to get things done, to accomplish goals, to try to get what I wanted.

These days, of course, I have a very different perspective on action and the role it plays in manifesting. I am all about inspired action…until I’m not.

I’m wide awake to those moments when I’m at the crossroads of inspired action versus striving action. For instance, when what I want hasn’t yet manifested, I know that’s the time to be really mindful about the temptation of striving action.

Another time I want to be especially mindful is at the beginning of something new I want to manifest. When I’ve launched what Abraham calls a rocket of desire.

That’s also a time to be really conscious of choosing the path of inspired action. Which often means waiting to act. Even holding myself back from taking any action unless it is truly inspired.

“Find the feeling place, and then find the inspired action. Don’t offer action in order to try to make something happen.” —Abraham

You’ll recall at the outset I said I’ve noticed a couple things about inspired action versus striving action. We’ve just talked about the first one—slipping into striving action when things aren’t manifesting as you want or on your schedule.

The second thing I’ve noticed is how easily we lose sight of what should always come before action.

“The rule of thumb is, you never take action where there is negative emotion within you because it will always be counterproductive. Always talk to yourself until you feel better and then follow the inspired action that comes from that open valve.” —Abraham

Now, at first glance, you may not think you’re taking action when there is negative emotion within you.

Many of us experience negative emotion, and rather than take Abraham’s advice to feel better first and then follow with inspired action, we’re taking action first and hoping that gets us what we want.

“It’s not about action…it’s about vibrational alignment.” —Abraham

Let’s look more closely at this idea that action taken when you feel negative emotion is counterproductive.

I’ll give you a couple examples of striving action that doesn’t yield good results.

Let’s say you want to be in a relationship. You want a romantic partner. However, you’re often not in alignment on this subject because you’re more focused on the lack of a romantic relationship in your life. Your thoughts and feelings go to the absence of a partner. You feel discouraged. Because you’re not in alignment, inspiration is blocked. But you are taking lots of action—spending lots of time on dating apps and even going on first dates. But it is the action of striving. Of efforting your way to make what you want happen. The dating apps aren’t the problem, your energy is. Your striving action is what’s blocking what you want.

Here’s another example. One of my clients was hiring for a key role in her company, and she wasn’t feeling good about how things were going. There had been hiccups in the recruiting process, disappointments about getting far along with two different candidates, but ultimately it not being a good fit. My client was frustrated and impatient. She worried about how much longer the position would be vacant. She was feeling a lot of negative emotion. And what did she do? She doubled down on action. Meaning she took more and more action to try to make what she wanted happen, to try to fill the role. My client admitted, None of it was aligned action. None of it was inspired action. Her striving action was blocking what she wants.

That’s why Abraham says: “I get it now that to try to take action and make something happen before I’ve really gotten myself into a better feeling place is counterproductive.”

Of course, Abraham isn’t saying don’t ever take action. But talk to yourself until you feel better first. Reach for better-feeling thoughts and move up the emotional scale before you take action. Get in alignment first.

Because then you are taking aligned action. Then you can tap into the power and flow and magic of inspired action.

I think we can keep it very simple when it comes to the difference between inspired action and striving action.

“Your work is to go forth into this physical environment looking for things that are a vibrational match to joy, connecting to Source Energy, and then following with the inspired action.” —Abraham

I’ll give you a little formula to make it easy to put what Abraham says into practice.

And, oh my, is it ever satisfying action! It’s not hustle and grind. It’s not action that is frantic and frenzied. It’s not begrudging action you really don’t want to take, that you’re making yourself do.

“Action that comes from the feeling of inspiration is action that will produce good results, for you are allowing the Laws of the Attraction of the Universe to carry you.” —Abraham